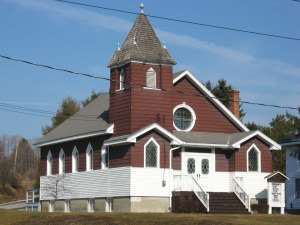 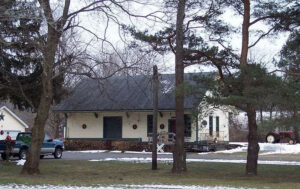 In 1870, Peter Crary obtained a large hotel from Peter Bain, thus the name became Craryville. In 1971, the railroad was constructed through the area. The station catered to a local community that had a substantial industry during the era of the NYCRR. The train station was originally opened in 1905, when the New York Central Railroad (NYCRR) created tracks up to Chatham. The line provided both passenger and freight train services.

However, with the demise of the NYCRR Passenger services in 1972, the station was closed for passengers and provided freight only services. Craryville provided commercial freight services until 1980, when the tracks north of Wassaic were dismantled. The Harlem Valley Rail Trail Association plans to extend the trail along the right-of-way in front of the site of the former station. 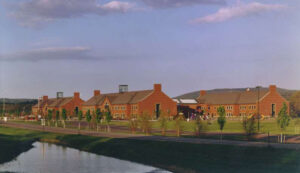 The original formal public schools of Columbia County were one room school houses. Many of them were established under the 1812 Common School Act. However, in the 1920s politicians identifying with the Progressive Movement began scrutinizing the one-room school house educational system. These politicians advocated a change to larger, more centralized schools, which they felt would provide more equal educational opportunities for all. When in 1931 the Roeliff Jansen Central School District formed it was made up of twenty-nine smaller districts. It became the largest school district up to that time. In 1946, the Ockawamick Central School District was created from fifteen of these small, rural school districts. Taconic Hills Central School District was formed in 1969 after the unification of the Roeliff Jansen and Ockawamick School Districts, two smaller districts. The School was located in Hillsdale. The Taconic Hills Central School opened in fall 1999 after years of debate about the district’s facilities plan and a fast-track design and construction process that took just a year and a half.

The $50 million school encompasses 350,000 square feet, making it one of the largest schools in the state of New York. The design, created by Rhinebeck Architecture & Planning in Rhinebeck, N.Y., is designed for a capacity of 2,000 students in K-12. The design groups the K-grade 2 and grades 3-6 units on one side and the grades 7-8 and grades 9-12 units on the other. The entry to each side features a two-story atrium, which helps orient students to their location in their wing. A community center is situated between the two school wings. The facility includes a 1,000-seat performing arts center that opens to an outdoor amphitheater (the two share a common stage), two media centers, an aquatic/fitness center, and three subdividable gymnasiums with stadium-style seating. The original quote of 759 interior and exterior doors included 276 interior and exterior hollow-metal doors. In mid-project, the school district received a donation that allowed for the addition of the aquatic/fitness center. Taconic Hills Central School has won several national, regional and state awards, including the prestigious Learning by Design 2001 Citation Award from the National School Boards Association. The Taconic Hills district also hosts many visitors from other districts who come to study the facility and borrow ideas for their own schools.