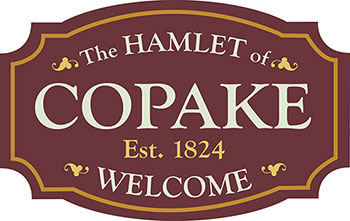 Tucked two minutes off Route 22, Copake Hamlet retains its charm as a mid-century agricultural community. Where else would you find a hamlet surrounding 100 acres of fertile farmland?

Copake Hamlet is a place where people know their neighbors and take care of each other. Don’t try to rush a walk around the block because there will be lots of chatting with friends along the route. It is a great place for young and mid-life families, single people and seniors because it offers routine social interactions that are not always found in remote settings.

The Hamlet is rich in history. The center of the Hamlet is the Copake Clock which was erected in 1944. Historic buildings include the Copake Grange built in 1902 and the United Methodist Church, built in 1853-1854.